Khalifa says she “blacked out” during every single sex scene she shot. 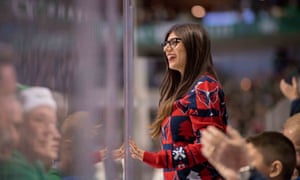 Khalifa says she “blacked out” during every single sex scene she shot. Nobody noticed this, presumably because preying on young, vulnerable women is normalised and, for many, part of its allure.

It is an industry where a parody such as Game of Bones (in which actual demeaning sex is taking place) elicits less outrage than an episode of Game of Thrones in which they pretend to do the same thing - Game of Thrones has often been criticised for its graphic, gratuitous sex scenes which were at times violent. When Khalifa, a Lebanese Catholic, donned a hijab in her most popular video, the outrage was largely from religious extremists, with Isis threatening her life. The chorus of “woke” Twitter film critics who regularly harangue Scarlett Johansson for cultural insensitivity regarding the roles she takes on were nowhere to be found.