We all hear about all the money social media influencers make and well, to be honest, most of it is bullshit. In reality, most influencers are nothing more than affiliates – which is a system we in adult use as well. Real brand deals are far and few between.

So how does it all work? Well, if I promote a new movie released by Elegant Angel, and someone clicks on my link and then buys that movie, I get paid a commission.

How much I get paid depends on how much traffic I have to send them. In other words, the more followers I have, the more valuable I am to Elegant Angel so they are willing to negotiate a deal with me.

The standard rate for a sale may be as little as $5 for each movie I influence someone to buy, but if I’m someone more famously like say Alexis Texas or Lana Rhoades, with a zillion followers, then I would be able to negotiate a bigger cut – maybe instead of getting $5 for each movie I sale, I might get paid double that – like $10. I mean honestly, there are no rules. I can make as much as I can convince them to pay me.

A smart influencer knows to work with companies that have a product or service that their followers would be interested in.

Let’s say I’m Tori Black. I have almost 500,000 twitter followers. That makes me a valuable influencer. As Tori Black (@misstoriblack) I would only want to promote products (or services) my fans would care about. Since they are a fan of mine, that must mean they like me, right? 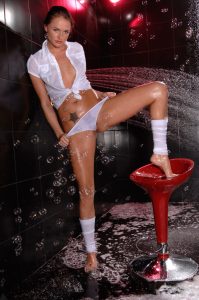 So the first thing I do is look at the companies I’ve done more than one movie with – Elegant Angel, Penthouse, Reality Kings, New Sensations, Digital Playground, Naughty America, Jules Jordan Video, Evil Angel, Adam and Eve, Blacked, and Hustler.

Okay, so Tori Black has a lot of options. She can pick from any of those companies to do a deal with. They will then give her a special link or link, and then pay her every 2 weeks, for all the sales she made the previous 2 weeks.

If after she starts working with the company, she does really well in sales, she can go back to them and be like listen, I’ve enjoyed working with you but the measly $5 per movie you are paying me isn’t enough for me to continue working with you so please increase it to $7 per movie (as an example here numbers aren’t real). They can either take the deal or if they decline, she can move on to the next company and do a deal with them, until she finds a company willing to pay her what she wants for her influence.

While it’s true mainstream companies aren’t likely to work with us in adult, you’d be surprised just how many adult companies are willing to pay you to promote them.

If you want to learn more about which company you can make bank within adult on social media, hit me up and I’ll help guide you. I’m on twitter as @MissKelliXXX.

You make a lot of valid points, lack of monetization by adult film stars is a huge loss of potential long term capital.

you mention Torrie Black she only needs 10,000 followers loyal and monetizing them monthly to make millions.